Remember, a list can be public or private. A private list is great for researching, whether it’s background for your latest book or keeping tabs on groups of people you are interested in following (but don’t want to look like a stalker) such as agents, publishers, journalists or reviewers.

A public list is one that other people can see and subscribe to. People who create public lists are often seen as authoritative and knowledgeable in that field, a ‘curator’ of useful people to follow and great content. But before you start a public list check out those already in existence, rather than re-inventing the wheel (see my next point).

You can of course subscribe to other people’s (public) lists. This means, for example, if you are a poet and want to follow other poets on Twitter, you don’t need to start your own list if you don’t want to, because someone like Antony Wilson has already created one called ‘Poets’ (and there are over 700 members).

When you add someone to a private list, they are not notified. This is why, if you don’t have a lot of followers, it’s a good idea to add people first to a private list rather than following loads of people.

Why? because it’s a good idea to keep your ratio of followers to followees either reasonably equal, or have more followers than followees. It is one of the informal criteria many people have for deciding whether to follow someone.

Here are a few ideas about how you could be using lists:

To capture the names of people involved in an event

How often do you meet interesting folks at a conference, or a book launch or other event, and exchanged names or contact details, perhaps hurriedly, then later struggled to remember the name or find their card? Why not create a Twitter list specifically for that event, and add their Twitter name to it there and then. If you’ve already created the list, and are using a tool such as Hootsuite on your phone, you can add names at least as quickly as adding someone to your phone book.

If you take part in a Twitter chat, you could also add participants to a list and give it the name of the chat. That way you can keep in touch with them without having to follow everyone, the list keeps growing as new people join the chat, and you’ll always remember the context in which you ‘met’.

To create a helpful resource

It’s not just your peers who may be grateful for a list of fellow crime writers on Twitter – your readers will also appreciate it. They’d probably also be really interested to know who are your favourite bloggers, or literary events, or living authors who are great Tweeters. List-makers are often seen as the curators, the do-ers, the people to be connected to on Twitter, so a bit of altruism in this department won’t do your reputation any harm.

To reward or show recognition

If there are people who regularly share your tweets, or respond, or are great conversationalists, or write consistently good blog posts, you could create a list for them and give it a ‘feelgood’ title that makes it clear why you’re grateful or why you rate them – ‘Awesome writer-bloggers’, ‘Generous Tweeters’ for example (or whatever works for you – but make it reasonably descriptive, so that anyone added to it feels rewarded and anyone coming across it will be impressed enough to follow or check out its members.

One thing that has changed since this time last year is how to search for Twitter lists on Google. The way to do it now is to type the following into the search box:

(with or without the angled brackets). For example:

brings up the following: 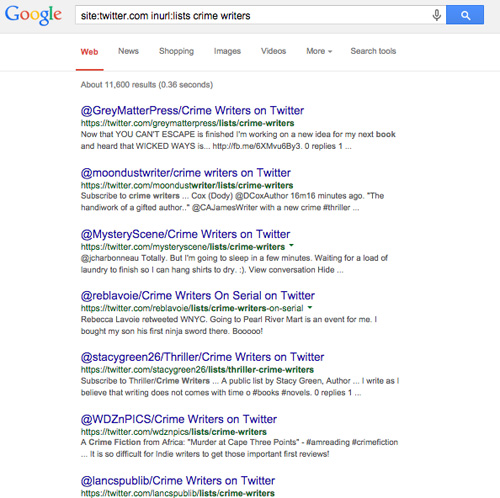 You can also search via the Twitter search box, and via people you already know on Twitter.

Good luck and have fun with lists – there are loads of other uses, let me know in the comments if you have devised innovative ways of using lists.