A Public List can be seen and subscribed to by anyone, but Private Lists are not visible or searchable by others. You might create Private Lists for research purposes, or if the subject matter of your list is sensitive (for example, competitor activity). 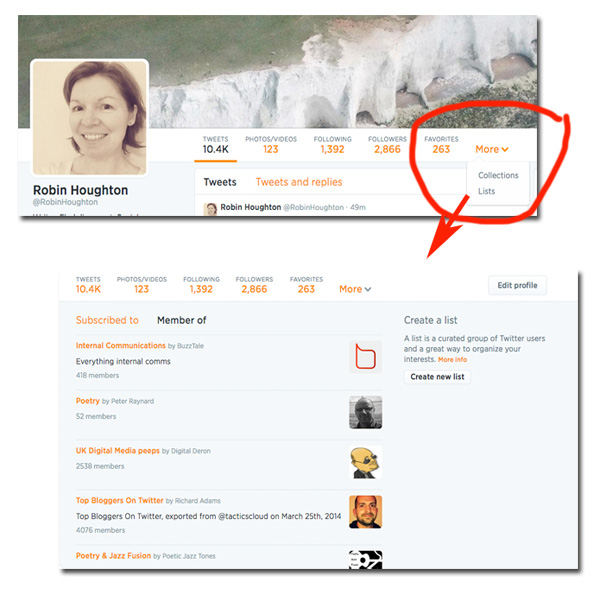 Where to find Twitter Lists from a Profile page

When you add someone to a List, they won’t get a notification, so adding someone to a Private List is a way of following someone without their knowing. This is one reason I recommend new Twitter users to get into the habit of adding people to lists.

Let’s say you want to follow Andrew Holgate, Literary Editor of The Times. The point at which you click ‘Follow’ may be your one and only chance to get his attention. If he decides to check you out and finds you haven’t tweeted yet and your profile isn’t complete, he probably won’t follow back.

As the number of people you follow grows, it gets harder to see everyone’s tweets, especially those outside your time zone. But a List is a much smaller group, which makes it easier to monitor those people’s tweets. 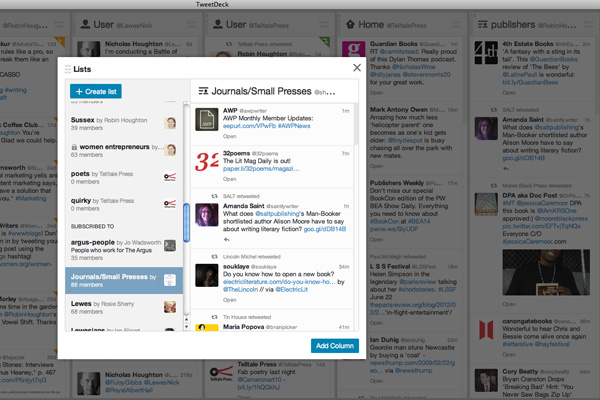 If you use a social media dashboard like Tweetdeck, you can add your Lists as columns which make them easy to follow, separate from the main Twitter stream

Don’t forget you can also follow other people’s lists, which is much quicker than creating your own from scratch, although you’re not in control of who’s on the list and therefore whose tweets you’re exposed to.

How to find lists

I recommend a multi-pronged approach, the same way that you would search for new (good) people to follow:

1.  Twitter search box – search by key words, names of publications or individuals. Although you can’t actually search for Lists, if you go to a profile page of a relevant individual, then check out the lists they are on, you can strike gold. For example, I searched for ‘literary editors’ and randomly chose Olivia Cole (@OliviaCole1), Literary editor of GQ & Editor of Spectator Life. Turns out she’s on hundreds of lists, from ‘Editors Worth Following’ , a List curated by Vincent Dignan,  to ‘Poets, Writers’ by David-Glen Smith.

2.  People you know – always check out the Lists of people you follow as it may throw up all kinds of great Lists already in existence. And if not, you’ll at least find more of the same kinds of people you want to follow and you can start your own List. 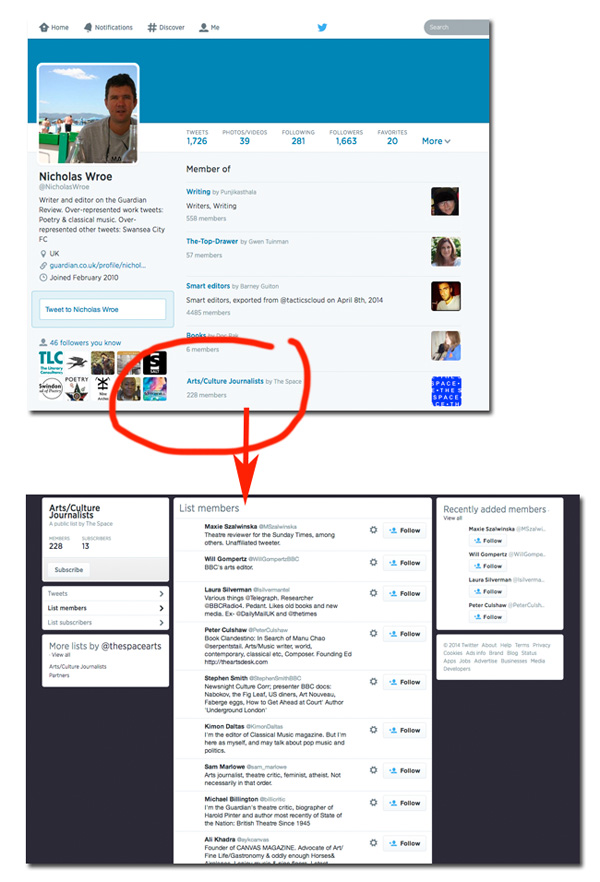 By looking at what Lists Guardian journalist Nicholas Wroe is on, I found a useful list of Arts/Culture Journalists

3.  Google Search – in the search box, do a site-wide search of Twitter by typing the following:

– replace ‘keyword’ with your search term and Google will find you Twitter Lists with that word in the title. 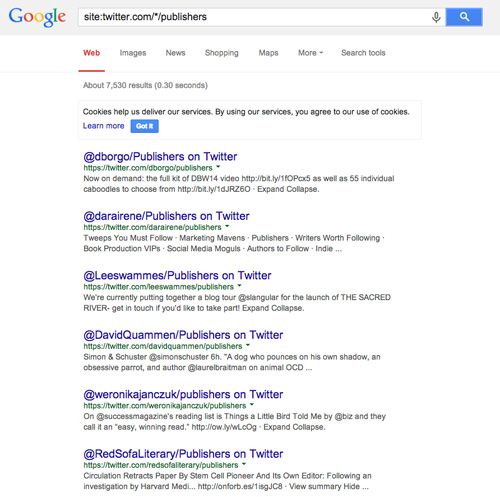 Some examples of how to use Lists

*      Seek out conversations around your writing genre/niche and add key participants (readers, reviewers, writers, enthusiasts) to a List. By following their conversations you’ll get to know their likes, tastes, buying habits, events they go to, etc. You might want to make this a Private List and call it ‘prospects’, for example.

*      Make a list of journalists, reviewers, books bloggers and other ‘influencers’ to find out what they are working on and see any relevant calls for contributors, expert quotes or interviews. Again, this could be either Public or Private, it’s up to you.